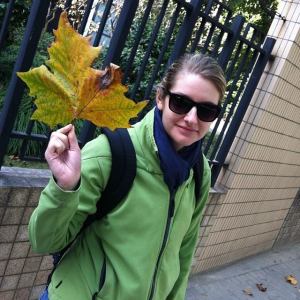 Angela and I have both spent the past week teaching music and playing in the pit for our school musical. This weekend was the performance, so the week prior was what many musical enthusiasts refer to as ‘tech week’. We had to be present at rehearsal every day from 4pm to 8pm. That made for quite a long week. I played trombone, so my job was relatively easy. Angela played piano for the musical, which is the most important job, and likely the most difficult. She did a great job. The best part was the very beginning; Angela played three chimes to begin the overture. She misplaced her fingers, and played a rather hip alteration of a chord. That was my favorite part of the show. Here she is wearing a wig and playing the piano.

On Saturday, we had two shows. Before our first show, Angela and I went to Mr. Pancake. They serve good old-fashioned Iowa breakfasts. Afterwards, I went next door to a local fake/fabric market that Angela frequents to have a nice coat made. I am quite excited about that. After our final performance on Saturday night, we had a few friends over for drinks, and what turned out to be a late night euchre game. My team won. Sunday morning we were going to wake up early to go grocery shopping. I slept in instead, but we did go grocery shopping. I even bought a small oven. All for now.

3 thoughts on “Fall in Shanghai”