On Tuesday, a small group of us decided to travel to a nearby suburb of Shanghai. There are several old water towns that are very close, and Zhujiajiao is called the Venice of China. With a name like that, how could we pass it up? Our friends John and Catherine Geisen-Kisch researched and found that the best way to get there was by taking a bus from Shanghai that only cost 12 RMB. So we did! We also brought Brett and Angie, the world travelers as they were keen on seeing a water town. The rest of our traveling group included Kat, Kathy, Dianne, and Julia. With 10 of us total, it was quite a large group. We took the metro to People’s Square, and then boarded the bus.

The trip took a little over an hour. I am guessing that is largely due to the fact that Tuesday was the beginning of Golden Week, which celebrates the National Day of the People’s Republic of China. The bus arrived with no problems, and we continued to make our way to Zhujiajiao.

The first stop was the Fangsheng Bridge. As you can see from the first picture below, most of China also thought it would be a good idea to explore the river towns today. See if you can spot Angela.

A side view of the bridge. 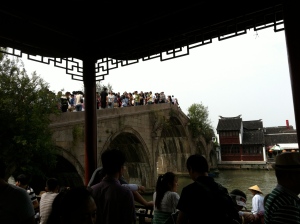 The crowds were a little oppressive through most of the day at Zhujiajiao. Also, tourism had taken such a strong hold that most of the shops seemed to sell the same thing that every little shop in Shanghai sold. The canals through the town were beautiful, with many little boats traveling up and down the river, but the rest of the town was shops. 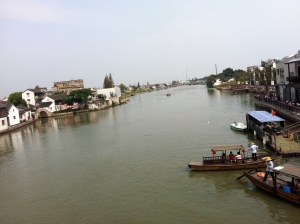 We did find Kezhi garden, which was a beautiful little escape from the crowded streets. 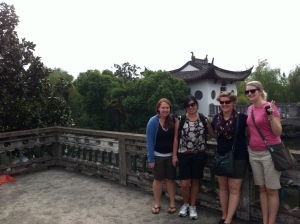 A large group of us decided to head back to Shanghai in the afternoon, but a small group of us wanted to see the town at night. I was glad that I stayed, because the crowds thinned out and we had a chance to see Zhujiajiao a little better. Our first stop was to have a beer by the river. 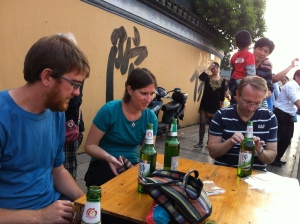 While we had a beer on the river, we also got to watch a man start swimming laps.

Next, we moved to a restaurant on a different section of the river for a little bit of food before we went back home on the bus. The town was very beautiful at night, and was a pleasant day trip overall.