Angela and I recently embarked on a three week exotic holiday vacation with our good Canadian friend named Kat. I think it is safe to say we are a little spoiled. I had my week full of concerts right before Christmas vacation, and then was rewarded with three weeks off. On Saturday morning, December 21st, we woke up at 5 in the morning so that we might catch our 9:00 AM flight to Chiangmai, Thailand. We arrived at the Pudong airport with plenty of time to get through security. I was a little surprised at how much easier it was to get through the security in Shanghai than in Chicago when we left for China. I started to take off my shoes and belt when the security guard laughed and said “ok, ok”. We all made it on to our flight with no problems. I found it a little depressing how sunny it was outside once we rose above the cloud of pollution that rests over Shanghai. Below is a graphic picture of the wall where it abruptly ends.

We had a brief layover in Kunming, China on our way to Chiang Mai, Thailand. There was absolutely nothing to be done in the Kunming airport, so we occupied ourselves with a brief game of Phase 10. Then we proceeded to board our plane, which we did on a stair car. That was a first time for Angela and I, and made me feel like the president, or a movie star. 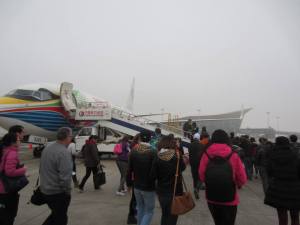 We finally made it to Chiang Mai. We booked a room at the Baan Klang Vieng hostel, and though it was basic, it fulfilled all of our needs. We had a private room for the three of us, and could lock it. The bathroom was shared, but clean (although the floor was always wet. Maybe because the shower and toilet were not really separated). 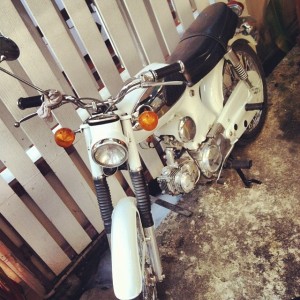 The picture above is a motorcycle owned by a barista that worked at a coffee shop right next to our hostel. We would frequently begin our day with a cup of coffee from him. I told him that I liked his motorcycle, but he would not let me ride it.

Our first full day in Chiang Mai was Sunday. We had decided to take a train when we left Chiang Mai, but we had not purchased the tickets to do so yet. Our first task on Sunday was to buy those tickets, so we could screw around for the rest of the day. I got directions from the woman who ran our hostel, along with a map, and we were soon on our way. We stopped for a few photo shoots with cool vehicles and temples that we found. 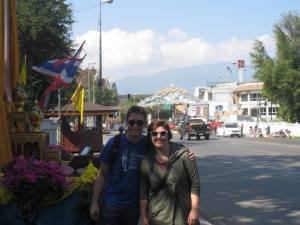 On the way to the train station, we did have one incident. A mouse ran out in front of me and nearly ran over my foot. I saw it and stopped, but our friend Kat somehow managed to step on the mouse. Needless to say, it was permanently damaged. I was amazed that she killed a mouse by stomping on it, but she was pretty sad about the whole ordeal. We tried buy overnight train tickets to Bangkok, but they were sold out. We decided to buy a train ticket that would leave at 8:00 AM on Friday. The train ride would be 12 hours, but at least we would be able to see the countryside. That was at least what I told everybody when we found out that we had to sit on a train for 12 hours during the day. We spent the rest of the night wandering around the ‘old city’, which is where our hostel was located. The old city is the original Chiang Mai, and is surrounded by parts of wall and the famous Tapae Gate. We visited the Sunday walking street market and I bought a sweet vacation hat. After the night market, we sat at a Mexican restaurant in the old city and listened to a Thai man cover famous songs.

On Monday, our friend Kat was feeling feverish so she took the day off. Angela and I did the Lonely Planet walking tour of the temples in the old city. In Thailand, you must dress appropriately to enter a temple. No shoulders, no shoes and no knees. Visitors had to put on a robe if they were not dressed appropriately. 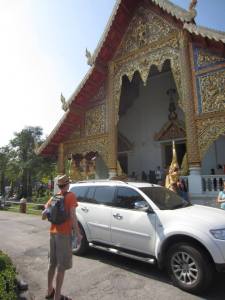 One of the highlights was at Wat Chedi Luang. At this temple was an ancient pagoda that was over 600 years old. The pagoda housed the Emerald Buddha when it resided in Chiang Mai. 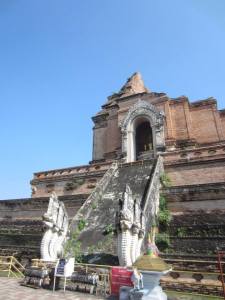 The buddha has since been moved to Bangkok. The temple also had a ‘monk chat’, where you could sit down and ask the monks any questions. This allowed the monks to practice their English.

After our walking temple tour, Kat met us for dinner. We decided to go to the Chiang Mai Night Bazaar after dinner. The bazaar was a huge walking street market that stretched for many blocks. We did a lot at the night market. Angela and Kat bought some things, and I bought a sweet beach shirt made out of linen. We also got a ‘fish pedicure’, which involves sticking your feet in a tank of water filled with little fish. The fish proceed to nibble off all of your dead skin. The experience reminded me of the video game Odell Down Under, because you could be one of those fish. After I had my feet eaten by fish, I was feeling completely unstoppable, so when Angela and Kat stopped to get ice cream, I went to a vendor a few stands down. Below is what I purchased.

These, my friends, are deep fried crickets and wood worm. I did not finish the dish, but I ate a lot of these, most of them in front of the girls to gross them out. After exploring the night market for a while we ran into some lady boys. They informed us that there was a free cabaret show that night. The three of us decided to attend. In order to keep this blog family friendly, I will not post any more about that experience.

On Tuesday we had a Thai cooking class. We walked to the Asia Scenic cooking school in the old city, just a few blocks away from our hostel. Here we met the rest of our cooking class, along with our teacher named ‘A’. ‘A’ took us all to the local market, and explained all of the ingredients that we would be using. 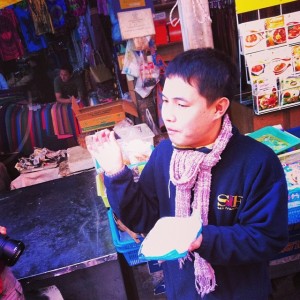 After the market, we went to a farm a few miles outside of Chiang Mai. This is where we had our cooking class, which was a ton of fun. The farm was absolutely beautiful. Our instructor had a great sense of humor. He made a lot of sexual innuendos, and told us that the more peppers we put in our dishes, the sexier we were. 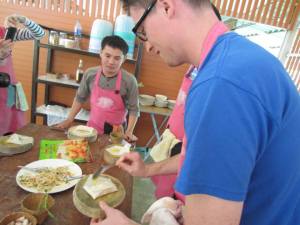 We ate all of our own dishes, and everything I made was pretty good, somewhat surprisingly. After our cooking class, we had dinner and drinks at the same Mexican restaurant that had live music. A 65 year old British man stopped by and talked to us for about an hour. His name was Rob, and he was somewhat racist against the Russians. We decided to buy his drinks for him.

Christmas day was one that I will never forget. We signed up for a hike and bike adventure in Doi Suthep-Pui National Park. We were picked up by the company, and went to their office in town to pick out a bicycle helmet and talk about the day. Then the guides loaded up the bikes and we were off.

The hike started off pretty easy. Doi Suthep Park is very jungle-like, and beautiful. Our guide asked if we wanted the extended tour to go see the biggest waterfall. His name was Art. Art said our group was small enough that we could do it, and basically convinced us to say yes. Art did tell us that the hike up from the waterfall was straight up. Of course nobody wanted to refuse, so we set off for the waterfall.

The waterfall was pretty cool, but not quite worth the hike that followed. It was brutal. There was no path, and we hiked straight up a hill for about 30 minutes.

After that, we hiked for about 3 hours to get to the top of the mountain. At the top, there was a very rustic mountain village where we ate a lunch of noodles and soup. The mountain villagers grow their own coffee beans, and had fresh coffee for sale. I bought a cup, and it was delicious. 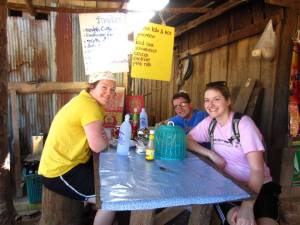 While we were eating lunch, there was a toddler playing with a huge knife behind us. He charged at Angela and swung his little knife at her stool. Afterward, his mother took the knife away and he cried and cried. Luckily, Angela got a photo of him charging at her, knife in hand.

After lunch, it was time to bike down the mountain. Our Canadian friend Kat was feeling very feverish after the hike, so she went down in the truck along with Angela, who kept her company. Their truck ride was equally as exciting as my bike ride was, as the road was rough and steep. I geared up and was given a Trek to ride.

I did not take very many pictures because the bike ride was intense. The level of difficultly was at the limit of my comfort level at times. Many of the other riders fell down, but I am proud to say that I stayed on the saddle. The area where we ended up at the bottom of the mountain was beautiful. 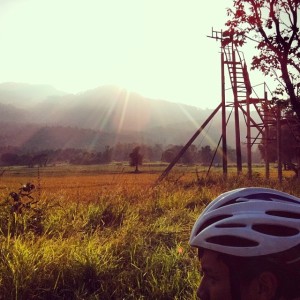 We arrived at a restaurant with huts on a beautiful lake, and ate dinner with our hike and bike group companions.

The scenery was beautiful. The guides loaded up our bicycles while we ate, and then we were off back to Chiang Mai. We ate dinner and chatted with a nice man from Sweden, pictured below. 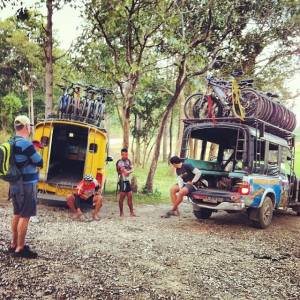 Thursday we took it easy and did laundry. On Friday we woke up and took a taxi to the train station. Chiang Mai reminded me a little of Iowa City, Iowa since it was easy to walk to all of the fun places. The old city in which our hostel was located was packed full of cheap restaurants and bars, and all in all the week in Chiang Mai was lovely.

This is what the taxis in Chiang Mai look like. This is called a songthaew, and are pick-up trucks with a topper and benches. You stop the driver, haggle briefly over a price, and then jump in the back. We agreed on 60 baht to get to the train station, which is pretty reasonable. Once we arrived at the train station, the driver told us he didn’t realize there were three of us, and that we owed him 90 baht. I tried to explain that we made it clear that there were 3 of us from the beginning. Then Angela came over and yelled at him until he said “ok ok” and drove away. All in all, Chiang Mai was a rocking good time. All for now.

One thought on “A Week in Chiang Mai, Thailand.”