On April 30th, Angela and I made a pilgrimage with our good friends Andrea, John, Catherine, Ross and Juliet, into the heart of Chinese beer country. We traveled to Qingdao, which is the home to the Tsingtao Brewery, which to be honest was the main reason for us visiting. We had a three day weekend, and so decided to make a quick trip out of it. We arrived to a slightly rainy and cold Qingdao, and transported directly to our beautiful little hostel called the Wheat Hostel and got checked in. After we moved into our new accommodations, we decided that we should find a local Tsingtao before turning in. We had heard rumors that they served beer in plastic bags in Qingdao, and were hopeful to score one. Upon turning the corner outside of our hostel, we were greeted by a nice Chinese man who immediately asked us if we wanted some. Perfect!

We soon found out that it seemed to be customary in Qingdao to try and pour beer with as much head as possible. However, the beer was delicious even still! We turned in soon after the above photo was captured.

The next day we decided to explore the ‘old town’ of Qingdao, which had a heavy German influence (as in, was built by Germans). This was after we spent about two hours sitting at various coffee shops.

Pictured above is the famous St. Michael’s Cathedral. There was a beautiful organ inside.

After we left St. Michael’s, we explored the area of Qingdao that had a heavy German influence. It was a moment where I totally forgot that we were actually in China. I felt as if I had stumbled into a European city somehow. The buildings were beautiful, and the streets were lined with trees. After we toured the Catholic Cathedral, we also went to see the protestant church, pictured below. 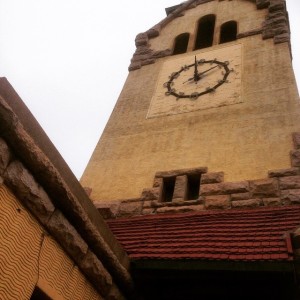 After a fair amount of wandering, we went to visit the mayor’s mansion. Chairman Mao would stay in this mansion quite frequently apparently. The architecture was beautiful, and there was a neat little pub in the basement. After we toured the mansion, most of our group was desperately hungry, so we stopped at the pub for some Tsingtao beer and, since it was a German restaurant, sausages and sauerkraut. 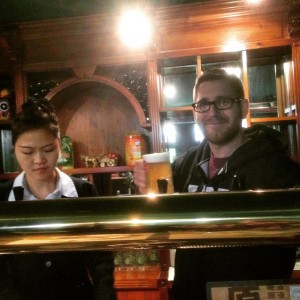 At the German pub in the basement of the mansion, we noticed that our bartender was dedicated to the age-old Qingdao custom of pouring beers with as much head as physically possible, and then scooping out the foam with a spoon. It took about 15 minutes per beer. Our friend Ross convinced them that it was his birthday, and for his birthday he would like to try and pour his own beer. They eventually conceded, and Ross proceeded to demonstrate the proper tilt to pour a beer without foam. This soon caught on, and our bartender started to try out the glass tilt. We decided that we had probably completely changed the way the citizens of Qingdao poured beer, and done the city a tremendous favor.

On Saturday, we visited the place that we were here for in the first place: The Tsingtao Brewery. After a great breakfast at a place called the Kiwi Cafe, we found the place known as beer street.

The brewery was a fairly large complex, with a great little museum. There was a welcoming statue of Dionysus at the entrance (pictured below), as well as some interested statues and billboards all around (above).

There was information on how the beer was brewed, the history of the brewery, and lots of other interesting information. Tsingtao beer is apparently China’s largest export, which was surprising given how many things are made in the country. 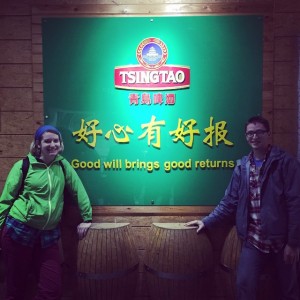 Pictured above was one of the interesting earlier labels of the beer when it was under German ownership.

After our tour, we received our complimentary Tsingtao raw beer. I have had many Tsingtaos during my time in China, and for the inexpensive domestic option, I think it is a fine beer. However, I would gladly pay for the Tsingtao raw beer at any upscale bar; it was delicious! Apparently, it is still made with fresh spring water that made Tsingtao famous to begin with, while Tsingtaos brewed elsewhere are made with regular water.

After our brewery tour, we had a few more beers in a bag on the beer street that surrounds the brewery.

Qingdao is a beautiful city, and I would gladly go back. All for now!

One thought on “Into the Heart of Beer Country: Qingdao, China”