After a great couple of days in Osaka, Ang and I took another short (15 minute) train ride to get to Kyoto. Kyoto is awesome. There is a great mix of new and classically old in this ancient city. We rented an Air BnB in Kyoto, which is basically somebody’s apartment that you rent out through this website. It was a slightly less expensive option compared to many hotels and even hostels, and it felt a little more like being at home as it was a fully furnished (although absolutely tiny) apartment. I loved it, and the owners were extremely helpful in leaving us all of the information that we would need to enjoy Kyoto.

After getting checked into our apartment, and having a Krispy Kreme doughnut and coffee, we wandered around Kyoto a little bit. We walked to the shopping arcade near the Gion district. There was a never-ending row of shops with a roof protecting it from rain. The first thing we found while wandering around was the ‘Ninja Restaurant‘. A good friend had made several obscure references to the Ninja Restaurant, and so I decided immediately that I had to go as we had stumbled upon it by complete accident. I did not realize that I was in for one of the larger disappointments of our trip. To be fair, I think there is a dinner show that you can go to, and maybe that is where the ninjas are, but our experience was in an interesting and creepy looking basement where I was expecting to be assaulted by fake ninjas a number of times. The wait staff was dressed up like ninjas, but that was the extent of our ninja interactions. I kept waiting for one to jump out and do something ninja-like, but that must only be available if you go to the show, which we did not. Instead we paid $80 for an all-you-can-eat-and-drink hot pot meal. The meal was good, but not $80 good. For that price, I really expected to have been struck by at least one ninja star.

Hot pot at the ninja restaurant. Notice the lack of ninjas.

After surviving the ninja-free restaurant, we wandered around the shops. Apparently vintage American college sweaters are really popular in Kyoto. We found all kinds of shops that sold sweaters from various institutions that we knew, including several Hawkeye sweaters.

I kept a hopeful eye open for a Luther College sweater, knowing that there was no chance. But then we found one!

I would have bought it, but it was really big. And the wrists of the sleeves were really weird.

The next day we tried to go to Nijo Castle. Trying to go to Nijo Castle would be a recurring theme during our time in Kyoto. We were in Japan during the New Years holiday, which is a huge deal in Japan. I would highly recommend a visit to Japan during this time as it is a great time to visit, but a lot of shops and attractions are closed from a few days before New Years Eve until several days after. All of the temples are always open, but the castles will all close. As such, we discovered that Nijo castle was closed on this day. I had visited Nijo Castle during my trip to Japan in college, and I really wanted to see it again and to show it to Angela, so I was a little disappointed, but we decided to go back the next day.

After striking out at Nijo Castle, Angela used her expert internet skills to find an awesome place for lunch. We went to ‘Menbakaichidai‘, which is a popular ramen noodle restaurant. At this particular ramen restaurant, they light your ramen on fire. It is technically the green onions and the oils that light on fire, but the noodles are delicious. We waited for almost an hour to get into the little restaurant, and were then seated at the bar. You could choose to not eat fire ramen and sit at a table, but Angela and I wanted our ramen on fire. The owner had a great sense of humor, and made everyone with long hair tie it up with a little rubber band. He wouldn’t let you take any photos, but had selfie sticks hanging behind the counter, so he would take your phone and put it in a selfie stick, and then he would take a video. The counter was warped from years of fire and oil, and we had to lean back as he lit the ramen on fire. 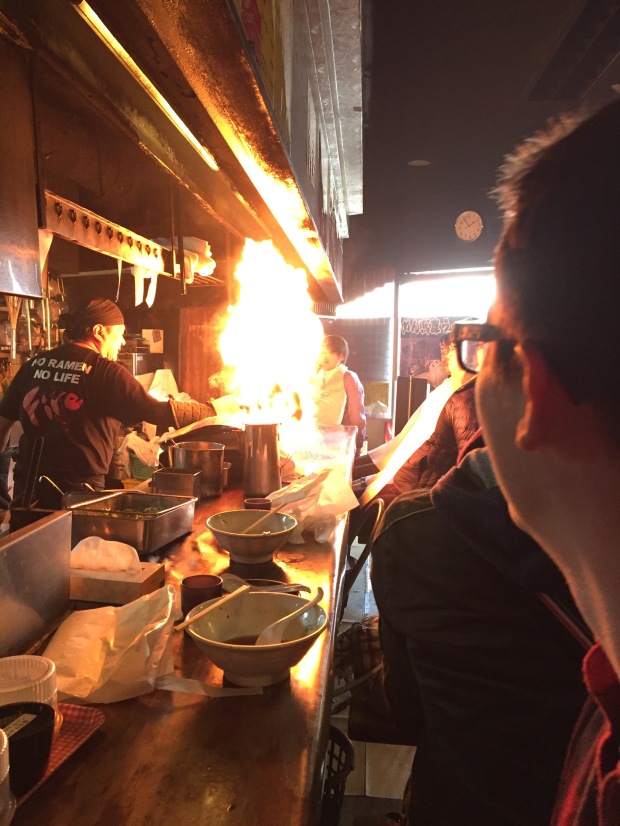 Watching other patrons get their ramen lit on fire. We were not allowed to photograph our own experience because it was too dangerous.

The noodles were delicious. I tried to get Angela to go back here, but she never lets me go to the same place twice while traveling, which is actually a great idea. I probably would have eaten here every day.

After our fire ramen, we wanted to visit Arashiyama, which is a district on the western edge of Kyoto. The fire ramen chef had asked us where we would go next, and then told us how to get there by bus. It was a lot quicker than the way we were going to get there, so we took his advice. There is an area filled with monkeys on the top of a hill in Arashiyama, so we hiked up there first. The view was great, and the monkeys were friendly. I learned that there is only one kind of monkey that lives in all of Japan, which I guess is not that surprising since it is a relatively small island. After the monkey mountain, we saw the famous bamboo forest in Arashiyama.

The view from the top of the monkey hill. That is a child, not a monkey.

On our way home, we saw the new Star Wars movie, which we both enjoyed a lot, especially since you can buy beer at the movie theater in Kyoto.

We had the best New Year’s Eve that I have had in several years. We started off by going to Kiyomizu-dera Temple. This temple has a beautiful view of Kyoto, and a long, steep road leading up to it full of interesting shops and food vendors. After enjoying the view, we went to Ginkaku-ji Temple, but once we arrived there Ang and I both discovered that we had complete temple fatigue. We decided to not enter Ginkaku-ji, and instead took a stroll on a nearby river. This famous walk is called ‘The Philosopher’s Walk‘. A famous philosopher used to take the same route to work everyday, and it was a beautiful walk. We walked all of the way to a place called Beer Komachi. This is a little bar that is run by a foreigner and sells only Japanese craft beers. These were some of the best craft beers I have ever had, and so Angela and I sat for a while and sampled a few different kinds. While drinking beers, we overhead another couple asking the owner what the best thing to do on New Years’ Eve in Kyoto was. He told them to go to a temple, and the Japanese bartender recommended a place called Yasaka Shrine. I have no idea if that couple went there, but we decided to go.

Yasaka Shrine is in the Gion district, which is the fancy district where Geishas can be spotted. We did not see any, but we did go to a delicious yakitori style restaurant for dinner. We had a lot of meat, veggies and various other foods on a stick, and the restaurant even served ‘black and tans’ with Asahi light and Asahi dark. We spent a while at this little bar before heading to Yasaka Shrine.

Enjoying a yakitori meal at ‘Show’.

Temples and shrines are a wild place on New Year’s Eve in Japan. There was plenty of hot sake, beer, and various food vendors all packed into the Yasaka Shrine. People cue up in a huge line to ring the bell at midnight. We opted out of that tradition, but we did partake in the hot sake.

The lanterns at Yasaka Shrine.

We saw Japanese people buying rope and lighting one end on fire during the New Year’s Eve celebration. The goal was to keep the rope burning into 2016 I think, and that was supposed to bring good fortune. Angela bought us a rope, but after she lit it discovered that she had lit the wrong end. To compensate for this, she also lit the correct end, and so we burned our rope from both ends. Needless to say, our rope did not make it to 2016. I am not sure what effects this will have on our year, but I think that we had an unfair disadvantage. 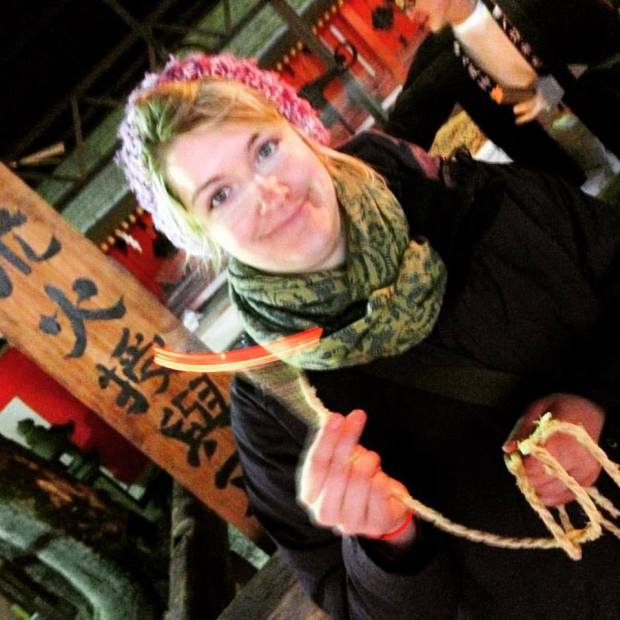 Angela and the burning rope of fortune.

We slept late on New Year’s Day, and made one of the worse decisions of our trip to Japan. We decided to continue participating in the Japanese New Years activities by heading to a shrine. Japanese people always head to a temple or shrine on New Year’s Day, or a day or two later, for the first temple visit of the new year. We went to the Fushimi Inari-taisha shrine, which is famous for it’s many torii gates. As we tend to do, we accidentally hiked up a mountain while exploring this shrine. After spending three hours pushing past the huge crowds of people and hiking around the mountain, we enjoyed a nice view of the sunset. 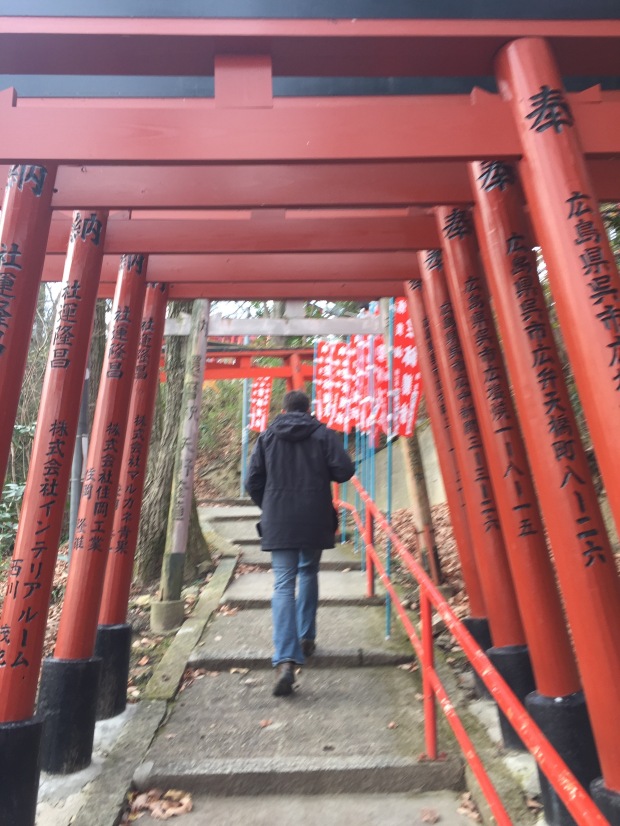 Hiking up the mountain at Fushimi Inari-taisha Shrine. 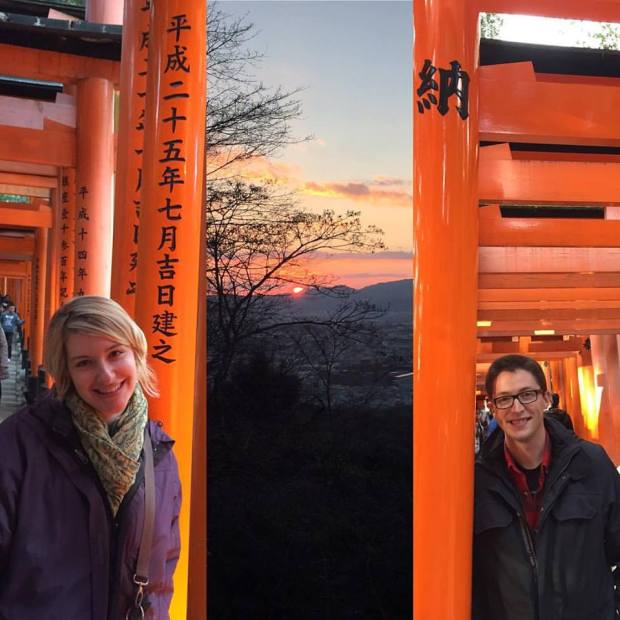 The sunset at Fushimi Inari-taisha Shrine.

The day after New Year’s day, we spent a great deal of time and effort trying to find a popular okonomiyaki restaurant. We found it, and because of the holiday it was closed. Luckily, we were pretty close to Kinkaku-ji Temple, also known as the Golden Pavilion, so we went there to admire the beautiful gardens and the pavilion itself.

The ‘Golden Pavilion’ in Kyoto. 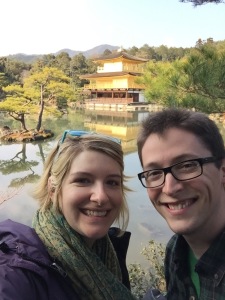 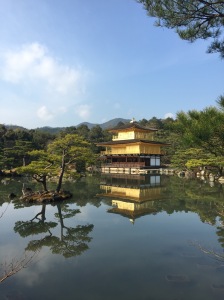 To be totally transparent, Angela’s expert camera skills make this look like a serene and peaceful place, but in all reality it was pretty packed with other tourists and not very enjoyable. I am not sure if this was because people were still getting their first temple visit of the year in or not. However, the pavilion and gardens were beautiful.

After the Golden Pavilion, we found a make-your-own okonomiyaki place.

Make your own okonomiyaki.

After that, we hurried to Nijo Castle for the second time to get there before closing time, only to discover that it was still closed for the holidays. We ended up at a pub called the Pig and Whistle, which was an English-style pub with western food.

Our last day in Kyoto, we finally made it to Nijo Castle. Only the grounds were open, and so we could not go inside the actual castle. That was a bummer as the castle is really cool. The gardens were beautiful though.

The gardens at Nijo Castle.

We spent one more night in Kyoto in a fancy ryokan style hotel. They had an onsen that we took advantage of, and a delicious breakfast. Overall, Kyoto was a great place to spend a week. New Years was a really cool time to visit, although a few places were closed, but we did not find that diminishing in any way to our enjoyment of the city.