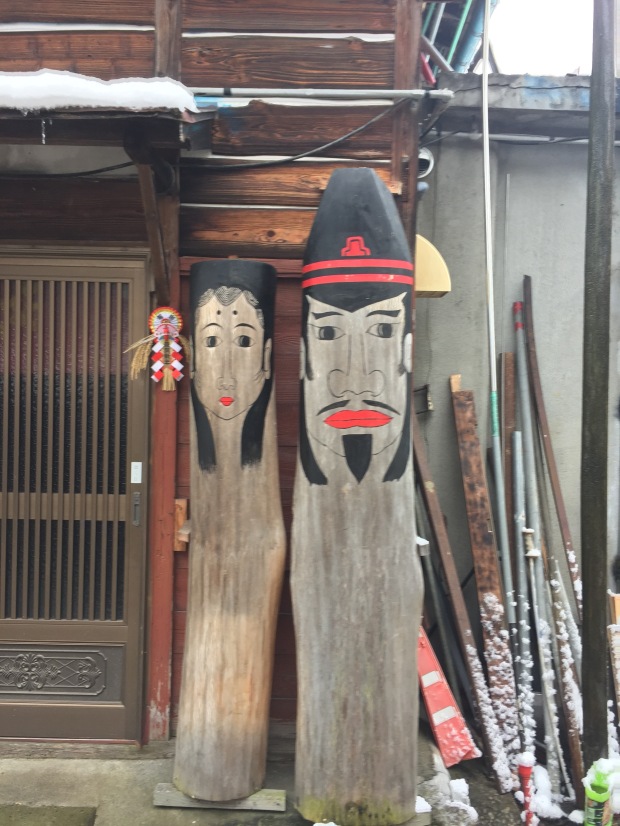 The official symbol of Nozawa Onsen. I never quite figured out what these statues were all about.

We had to take a cab from the nearest train station to the actual town. This is a small town, and it was silly of me to think that it would have a train station. There were two cabs waiting outside the train station waiting for customer such as us, and they had apparently been there some time. The first cab driver in line was fast asleep in his car. We awkwardly peered inside at the sleeping driver, and then started to walk to the next cab, who flashed his lights at us. We thought that meant he wanted to give us a ride, but he got out of his cab and started yelling at us to take the first cab. In China, he would have swooped in and gladly taken our fare, but things are not done that way in Japan.

We arrived to our guesthouse ‘Peanuts House‘ in Nozawa Onsen. This is the most spectacular place I have ever stayed in my entire life. The accommodations were cozy and simple, and the woman in charge is perhaps the friendliest woman on the planet. She helped get us discounted lift tickets to go skiing, and she offered to drive us to the slopes every day. She spoke very little English (again, our problem not hers) but was so determined to communicate with us that she would frequently use her phone to find the translation. She was wonderful. We had heard the food was good, so we booked breakfast before our big ski day and then went to sleep in our Japanese-style room.

Our hostess made the most delicious local Japanese breakfast for us the next day, and we enjoyed it while speaking with a few other guests. One couple was from Australia, and they gave us many tips to help us enjoy our day. We headed to Mt. Dock to rent our skis based on their recommendation, and they were really helpful in getting us ready to go. Soon we were on the gondola, ready for our ski adventure.

Angela was nervous. So was I.

I had not skied for several years, and so I was a little apprehensive about it. Angela had only been skiing a few times, so we were both nervous to ski on an actual mountain. It had been fairly warm with little snow, so a lot of the mountain was closed off. Thanks to another recommendation from our Australian friends, we went straight to the top where the snow was supposedly the best. We soon entered an extremely thick cloud of fog. 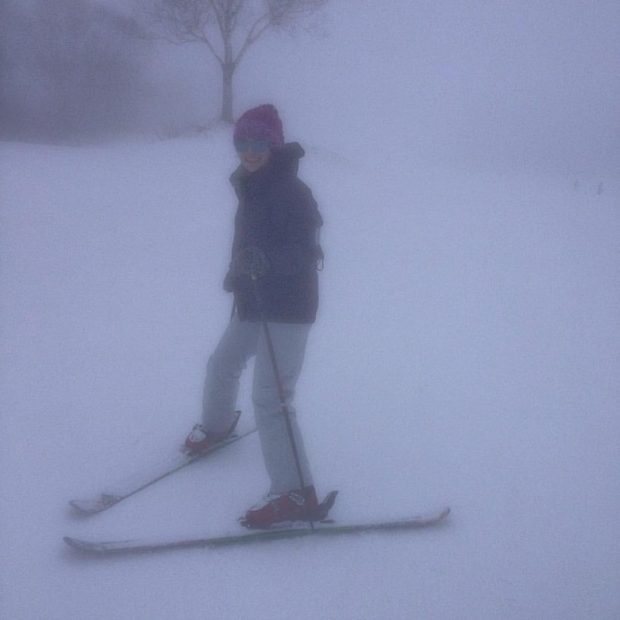 Angela and the fog.

It has always been a goal of mine to ski on a mountain, and Nozawa Onsen did not disappoint. We were able to ski for more than 45 seconds straight, which is what I was used to doing in Northeastern Iowa. In fact, it was more like 30 minutes.

Notice the intense fog still present. That ski lift is disappearing into the white haze.

After successfully making it down the top half of the mountain, we decided to take a break. The bottom half of the mountain was closed since they had not had enough snow, and although a lot of people were complaining about the snow conditions where we were skiing, I found it to be ridiculously entertaining.

Ski break on the mountain!

After getting off of the slopes, and relaxing for a while, we decided to eat dinner at the ‘early bird special’ time (aka old people time – no offense anyone). On our first night, we casually strolled around the quaint town of Nozawa Onsen expecting to stop in anywhere our hearts desired. However, there were a lot of other visitors packed into the little town, and we found all of the nice little restaurants to be completely full. They were also totally unwilling to accept reservations, which I sort of respected. They knew they would get plenty of business, and so it was all done on a first-come-first-serve basis. We really wanted to eat some sushi, so we decided to go super early in order to get it. We were literally waiting outside the door before it opened, and we were rewarded justly for our efforts.

Look at all of that raw fish!

The second day, we decided that a half day was enough. We were pretty out of ski-shape and sore, and we also wanted to visit the snow monkeys nearby. We woke up early to eat a delicious homemade breakfast from our hostess and hit the slopes in order to get plenty of ski time. Angela was not quite so keen today as the warmer temperatures had turned the snow a little icy, so I took the opportunity to complete at least half of my goal: ski down the mountain. I really wanted to go from the very top to the very bottom, but as the bottom half was closed I settled for going as high as I could and skiing back down while Angela chilled out (or warmed up) in the lodge. The fog had lifted, and the view was one of the best in my young life. 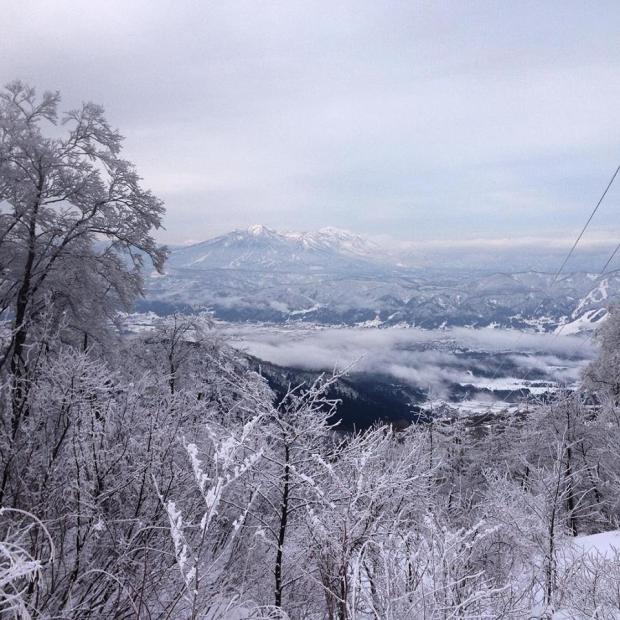 The view from almost the very top.

The view from the very top. (Actually I could have gone up about 10 more feet, but I called it close enough)

Took a picture of the frosted branches on the trees as I took a break partway down the top run, contemplating whether I was actually going to survive or not. It was STEEP!

Taking another break for a photo before finishing the highest run of the mountain. You can’t see the slope in front of me because it is basically a cliff.

After getting my goal halfway completed, Angela and I skied down as far as we could before taking the gondola to the foot of the mountain. 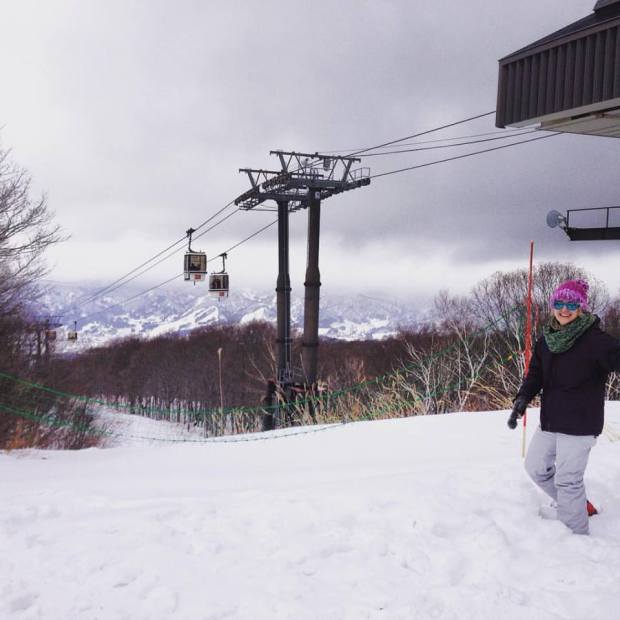 The view from the lowest gondola station, about halfway up the mountain.

Post-skiing picture. Happy because nobody got hurt!

We made it back to our guest house in plenty of time to catch a bus to see some snow monkeys. These monkeys were identical to the monkeys we saw in Kyoto, except there was also snow. The one special thing about the snow monkeys is that they have their own little hot spring that some of the monkeys take advantage of. 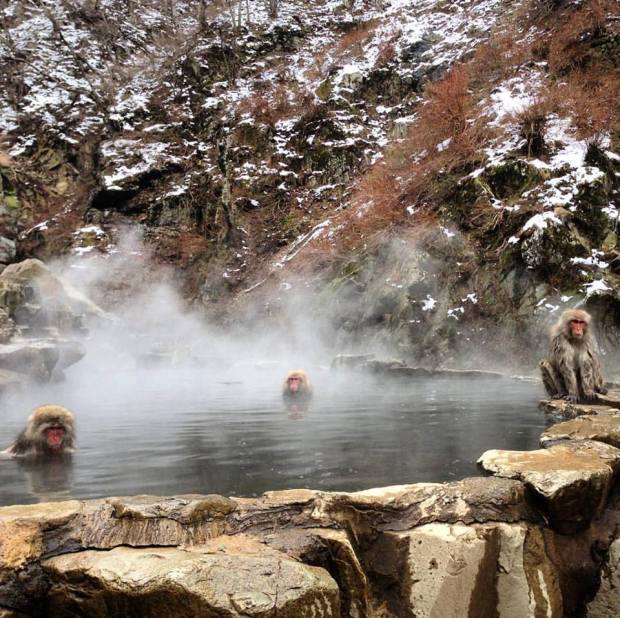 Monkeys enjoying a good soak in the onsen.

Some of the monkeys completely abstained from the hot spring, which I found fascinating. It would be interesting to know if the percentage of monkeys that soak a little, soak a lot, and soak not at all would be similar to a group of humans.

Every day that we were in Nozawa Onsen, we took advantage of the local onsens. There is hot volcanic water flowing inside of the mountains in Japan, and long ago the Japaense people routed this hot water into these public baths called onsens. Nozawa Onsen has thirteen of these natural hot springs, which is where it gets it’s name. The locals use the onsens as their sole source for bathing.

I was really nervous about the onsens, and so I did a lot of homework on the subject. The Japanese people are warm and welcoming, and happy to share their culture, but I also knew that doing things the right way was key in onsening. Here were my findings, both from the internet and from my newly obtained personal experience:

I found the onsens to be really enjoyable. We visited a couple of different ones, and thanks to some helpful internet resources, we were able to do it the correct way. The locals were glad to have guests that took the time to do it the right way, and I even had a nice conversation in Nozawa’s oldest onsen with the local art teacher.

The outside of one of the local onsens.

All of the onsens were open to the public, and free of charge (there was a box to put money in at your leisure). They were well maintained and awesome. There is one onsen that is not open to visitors, because it is so hot that it would boil anyone who entered it alive. The locals only use this onsen for cooking. 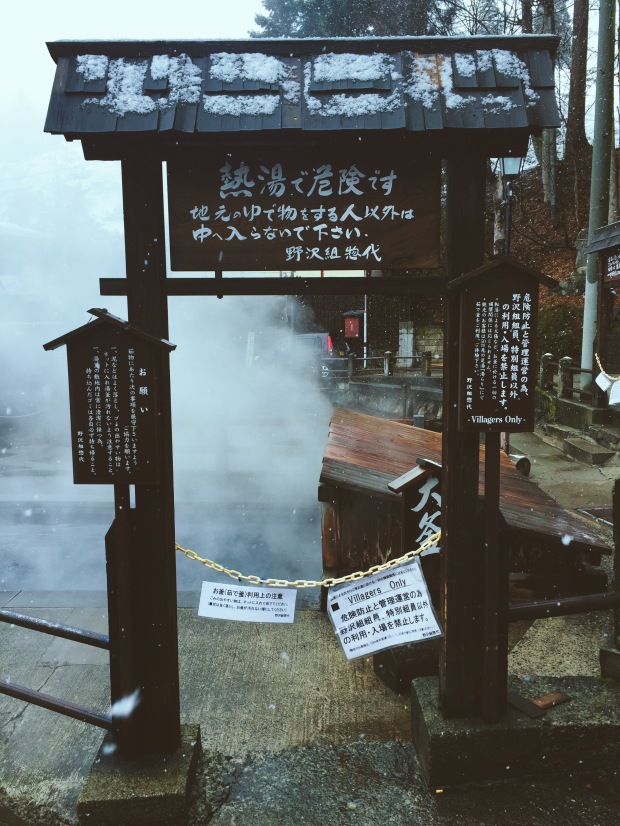 Nozawa Onsen was a beautiful place to visit, so much so that I would gladly go back. The town is awesome, the skiing is awesome, and the people are really nice. I couldn’t recommend it highly enough. Well done, Japan!