For our last break of the year, we traveled to Bangkok and Cambodia.  It was our 2nd time in Bangkok but our first actually spending time in the city.   The main reason we were in Bangkok was for a work-related conference.  The conference was nice and it was fun to travel with our friends/co-workers.  The conference was held at the Shangri-La hotel and was conveniently a short walk from our hotel.  After a late arrival (4 am) we attended the one and only music related event of the conference!  Our first night in Bangkok we had a conference sponsored cocktail hour by the pool!   Free wine and beer and delicious food made for a great start to vacation!  Later, we ventured to a roof top bar (made famous from Hangover 2) for views of the city.  The drinks were pricey but the views and company were nice.

The next day after attending the conference, Boramy, Kathy, Jason and I ventured to the Royal Palace and Reclining Buddha located in Wat Pho.  Traffic in Bangkok can be awful so the easiest way for us to reach our destination was to take a water taxi or tourist boat.  It was very easy to navigate and the boat guide told what attractions were at each stop. It was also a nice way to cool off since the temperatures were in the upper 90s!

After a nice boat ride we arrived at Wat Pho.  The reclining Buddha was huge!   You’ll notice I’m wearing a bright green robe.  In most Buddhist temples you’re required to cover up your legs and shoulders.  A lot of temples will have clothing for your to borrow, if not you are stuck outside.

After wondering the grounds of Wat Pho we headed over to the Grand Palace. The gate to the palace was right across the road, but the entrance was on the opposite side.  Along the way, we were approached by 2 different “tourist police” equipped with badges and everything telling us that the palace was closed and to come back tomorrow.  They then tried to get us in a Tuk-Tuk saying they could take us to see various other sights in the city.  We said no and walked away.  We didn’t buy it so we kept walking and were approached again by a different man with the same plot. We then knew for sure it was a scam and made our way to the Grand Palace.

That night we went to a local night market down the river.  We didn’t stay too long as it was too expensive and seemed like Shanghai.  Instead Jason, Andrea and I went back to the food market near our hotel and got 2 pitchers of beer, fried rice, green and yellow curry and noodles for less than $10.  It’s hard to beat!  Plus street food in Thailand is amazing and cheap.  There is nothing like it!

Sunday was our last day in Bangkok.  The SCIS faculty attending the conference got together for a “learn and share” presentation that took most of the day.  After Bangkok we were headed to Cambodia with the group pictured below!  Pictured L-R  Jason, Angela, Kathy (grade 2 New Zeland)  Boramy, (pre-k California)  Danny (MS PE- Chicago)  Heather (grade 5 Wisconsin) , Kat (MS PE Canada) 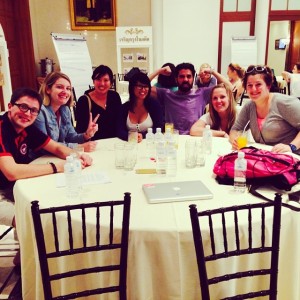 Our 2nd part and actual “vacation” started with a short flight to Siem Reap, Cambodia.  We flew on a prop plane, which was a first for me!  It was maybe a 45 minute flight and all they offered on the plane was beer and tea! We couldn’t complain. 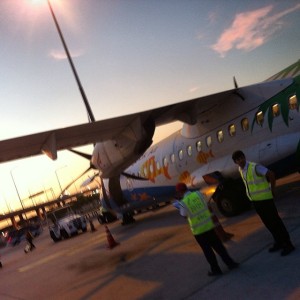 Luckily for us, our friend Boramy is Cambodian and had an uncle living in Cambodia.  Our first night we met up with him and went to his friends Mexican restaurant for $1 margaritas!   Overall, Cambodia was a great trip. It was the first time we’ve used the US dollar since coming to China.  In a way it made things seem more expensive since I knew exactly how much I was spending without having to use a conversion app!  The main way to get around, like in most of SE Asian cities is by Tuk-Tuks.  In Siem Reap they seem to out number cars.  Your average Tuk-Tuk ride will cost you $2.  Luckily for us, we rented an air-conditioned van!

Our first day we went to Angkor Wat.   Recently Google created a street view of the temples so you can see what we saw from your couch or desk or bed!

It was HOT with little shade or breeze to be had.   But besides the heat, the temples were amazing.   Angkor Wat is a UNESCO world heritage site and an amazing piece of craftsmanship and architecture.

A unique thing about Cambodia is all of the children selling things.  Anywhere you go these adorable, dirty, and cute looking kids will come up to you trying to sell you anything.  It really hurts to say no.

Our 2nd day we were pretty beat from the heat so we decided to take it easy.  We slept in and took the van to  Banteay Srie and Ta Prohm.   Both ancient temples and both in ruins.   Banteay Srie was much smaller and different from Angkor Wat.  A lot of the temple is destroyed and the coloring is much different. 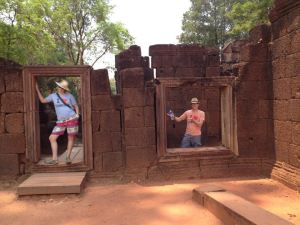 Ta Prohm is famous for being in the movie Tomb Raider!   IT was amazing to see the various tree roots take over the temples.   A lot of this temple was under construction but it was quite and peaceful to walk around since an ancient place. 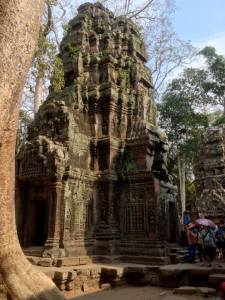 We also decided to wear matching T-shirts on our last tour day in Siem Reap. We got a lot of looks with our sweet shirts!   We spent our last night having a few drinks on the famous Pub Street in Siem Reap!

The next morning we were able to relax before we ventured on a 6hr bus ride to the capitol Phnom Penh.   The bus ride wasn’t the best; however, it did have free wi-fi and A/C.   There was also another music teacher from Shanghai on the bus!  All of this made up for the fact that there was a puking child in the front seat!

The main attractions of Phnom Penh were more on the historical side of Cambodia’s tragic history.  Cambodia is still a very developing country.  It’s crazy to think how recent all of the atrocities happened.   We visited Tuol Sleng or S-51, a former high school used for torturing and mass murders.  It now serves as a museum.

Jason went to the killing fields were thousands of Cambodians were killed.  The worst part is that there were no guns used in the killings.

As far as price was the hotels and transportation was cheap.  In Phnom Penh we rented a tuk-tuk for $20 a day and he would stay at our hotel and take us wherever we needed!   Food wise we ate at some fancy restaurants but still cheap ($10-15) to some western standards.   Since we were in a big group it was easier for us to justify things like renting a van and a tuk-tuk.  We enjoyed our time in Cambodia and it was great to check it of our Asia travel list!

For now we are back in school until June 20!