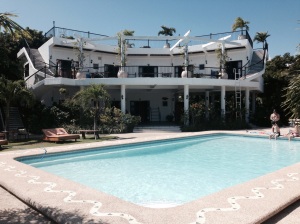 The photo above and on the right is taken from the balcony of the photo on the left.

We spent the entire day on Sunday and Monday sitting around, having a few drinks and enjoying one another’s company. There was a beautiful coral reef in the water right outside of our hotel, and Angela and I had purchased some snorkeling gear in Shanghai to bring along. We could walk to the water, and immediately be snorkeling in a beautiful reef with all kinds of fish to see. It was unbelievable. I went snorkeling twice on Monday, and one of our friends, Catherine, spotted a sea turtle! I was too slow to see it. 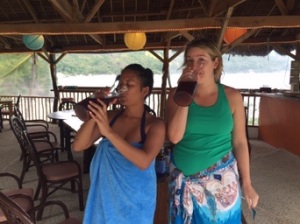 Angela and our friend Boramy enjoying a homemade concoction of sangria in our dining hut.

On Tuesday, our group booked a boat ride to a spot on the island where they feed whale sharks. The boat docked in the bay right by our hotel, and we waded through the rocky shoreline to board.

The boat ride lasted about an hour. We saw a sea turtle on the way, but it was pretty brief. We had a great time seeing the coastline of Cebu island, and enjoying the fresh air.

The whale shark feeding area was really rocky, and most of us were too stupid to have worn appropriate shoes. We staggered our way to the briefing area, where they made us wash off all of our sunscreen. Then we boarded a canoe and paddled out into the feeding area. 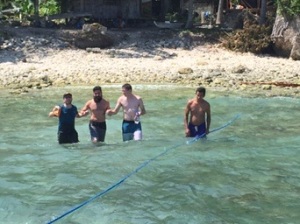 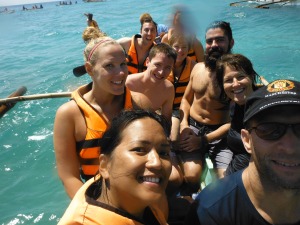 We jumped into the ocean and were instructed to hang onto the boat while we watched the whale sharks. They fed the sharks in a line so that they were continuously swimming past us. It felt a little manufactured, but the whale sharks were still free to come and go as they pleased. They were huge! We rented a GoPro camera from our hotel to capture the underwater pictures. 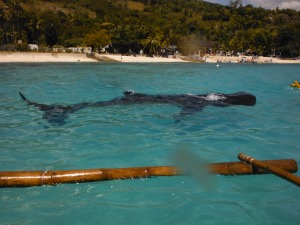 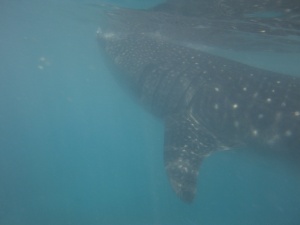 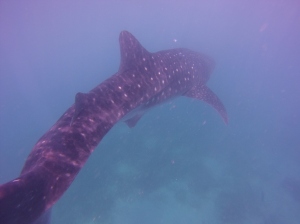 After watching the whale sharks for 30 minutes, we went back to our boat. We were then taken to Sumilon Island, which is a private island nearby the whale sharks. It felt a little James Bondesque, but we enjoyed another round of beautiful snorkeling and a little bit of hanging out on a deserted island.

On Wednesday, my Canadian friend Kat and I learned to scuba dive in the hotel pool. I felt pretty comfortable with the experience, and so we scheduled a dive for the next day in the ocean right outside our hotel.

I was surprised by how uncomfortable I felt as soon as we got into the open ocean. I had to surface shortly after going under as I was completely panicked. Our dive master Andre let me descend slowly, and that helped some, but I was never very comfortable. Andre held onto Kat and I and led us through the coral at around 10 meters deep. We saw two sea turtles close up, a lobster, and all kinds of fish. It was a lovely experience, though still a little terrifying for me.

On Thursday, we visited a waterfall! Our hotel rented scooters, and Angela and I scored a semi-automatic. I had never ridden a semi-automatic before, and when she told me it was a semi-automatic, I was confused if she was talking about handguns or scooters. Turns out, you still have to shift with your toe, but you don’t need a clutch! It was a vehicle first for me, and we selected our scooter based on power rather than any aesthetic reasons. We rode for about 25km before reaching the mountain that we had to climb in order to see the waterfall. We stopped for a picture at the top:

Once we had parked at the top, we had to practically walk about down the other side of the mountain. It was one of the steepest walks of my life, but the waterfall was beautiful.

It was probably close to 100 yards high, and the water was clear but terribly cold. We swam in the small pond, and it was one of those moments where you think, “I’m going to remember this experience forever.” I loved it.

While scootering home, we stopped in the town of Oslob. While taking the boat to snorkel with the whale sharks, we had seen a beautiful old church along the coast. We found it in Oslob. The Church of the Immaculate Conception was first built in 1848. The church sits right on the coast, so we enjoyed the ocean after exploring the grounds. 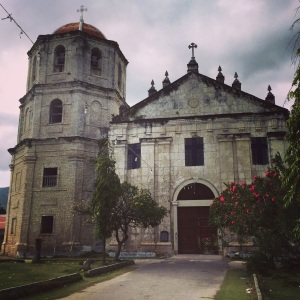 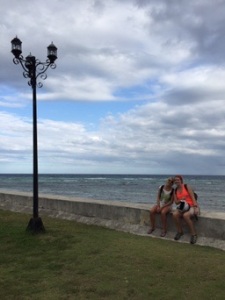 On Friday, we drove 1.5 hours away to dive again. Our Belgium dive master told us about a spot where there was a school of billions of sardines. He thought the dive would be easy for Kat and I as beginners since the sardines are so near the surface, but still spectacular enough for the more experienced divers in our group to be impressed. We arrived at a small village based solely around all of the divers and snorkelers that visit. Andre took Kat and I out for a 2KM dive at around 8 meters. We went underneath the school of sardines, and it was almost like entering a cave. The sardines would switch directions and form bizarre shapes all together. It was really surreal. We followed a big drop off near the coast where there was a lot of beautiful coral and interesting fish. We also saw another sea turtle, bringing our count to three! I was much more relaxed during this dive, and I think that was because Andre didn’t hold onto me the entire time. I was free to go as low or shallow as I chose, and that control make me more at ease. I really loved the experience the second time around, and am most definitely excited to try it again.

The rest of our vacation involved flying back to Shanghai, and is far too depressing to talk about, so we’ll leave it at that. Cebu was amazing, and I cannot wait to go back to the Philippines.

3 thoughts on “The Return to Paradise: Cebu, Philippines”