On Friday, December 27th, 2013, Canadian Kat, Angela and I departed Chiang Mai, Thailand on a 12 hour day train to Bangkok. The train was pretty basic, but comfortable enough. I appreciated the fact that we could see the scenery on the train ride as well, but I admittedly was uninterested in the scenery by hour 9. Angela booked a hotel room near the airport for Friday night since we flew out early on Saturday. We discovered that the train stopped right outside the airport, so instead of riding it to the train station, we stopped literally right outside of our hotel. I always appreciate when things work out like that. We spent the evening recovering from our hostel stay by ordering room service and taking hot showers.

On Saturday, we flew to Si Thammarat, Thailand where we caught a bus to the Don Sak International Pier. There we caught a large ferry to the island of Koh Phangan. The boat ride was around 1 and a half hours. We did have one casualty on the ferry ride. My vacation hat blew off into the ocean while I was enjoying the scenery. It was quite a difficult day.

We arrived on Koh Phangan in good time. The beach we decided to stay on was called Haad Khuad, nicknamed ‘Bottle Beach’. It was a beautiful and secluded beach on the north side of the island. This is where we spent the whole week. The wind was strong and so we had fairly large waves the whole time. This put a little bit of a damper on our plans, so the only thing we did was sleep, eat and read our books on the beach. 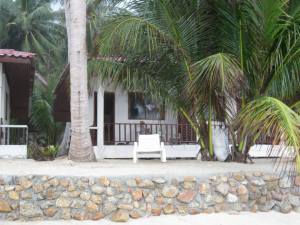 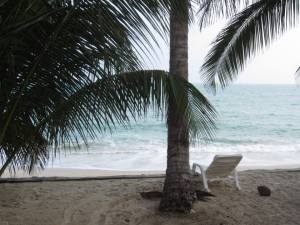 Here is a photo from our front porch. 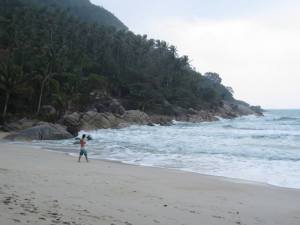 This is the West side of the beach. There were three different resorts spread out on the beach. The rocks in the photo is where the sand ended, but there was a path that led into the jungle beyond the beach. I hiked once for about 30 minutes, but did not get anywhere. Apparently it was possible to hike to the neighboring beach, but that would have taken 3 or 4 hours. 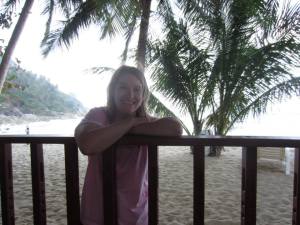 This is another photo from our front porch.

Here is our front porch. It is not quite as scenic as the view from the other side. I am halfway through the third Game of Thrones book in this picture. 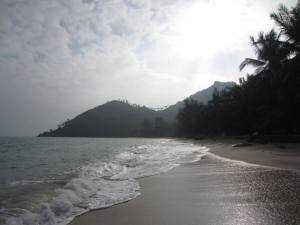 Above is a picture taken from the West side of the beach, facing East. This is the length of the beach we had at our disposal. 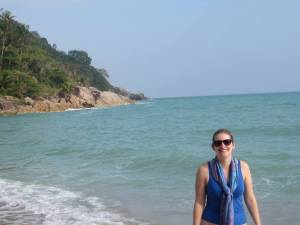 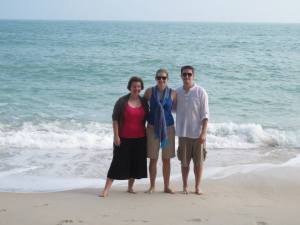 On one evening of our stay at Bottle Beach, our resort had a barbecue. The staff at Bottle Beach was almost as fun as living on the beach is. The head waiter was a man from Myanmar named ‘Yo-Yo’, and he was hilarious. He was also great with kids, and there were a few of them stay at our resort. Pictured below are the dining options we had to choose from, and my selection for the barbecue.

I had the red snapper.

One of the waiters was a pretty accomplished guitar player. He wanted to learn how to play ‘Hotel California’, so I tried to show him.

One day we decided to travel into town, since we were running out of things to do on the beach. We took a “cab” to Thong Sala, which is on the south side of the island. We had already been in Thong Sala earlier, since it hosts the main pier that our ferry arrived at. I had grandiose plans of renting a jeep, and exploring the island while getting a little driving fix. Unfortunately, the vehicles were all booked. I was sad. I bought a new vacation hat, and we decided to eat lunch at a famous restaurant called “Fisherman’s Restaurant”, shown below.

The seafood was so fresh at this restaurant that they didn’t have any. With the rough waves, the boat had not arrived with the catch of the day. Angela and Kat tried to order about 4 different dishes before we all ended up with mackerel. The fish was certainly delicious, and the restaurant had old fishing boats converted into tables, and a great view of the sea.

There is not too much more to tell of our stay on Koh Phangan. We did not do very much, but it was certainly luxurious to be on such a secluded island. On the Southeast part of the island, Koh Phangan hosts the infamous Full Moon Parties, which are wild and crazy. We spoke briefly about attending the New Years Eve Full Moon Party, but we decided to stay on our secret and quiet beach. We had a bonfire on the beach, and one of the waiters (the guitar player) was actually a fairly accomplished fire dancer. We had a few quiet drinks on the ocean and watched him throw flaming sticks around the beach. I was asleep before midnight.

On Thursday, January 2nd we transferred to Koh Samui, which is an island to the South of Koh Phangan. We were only scheduled to be on this island for one full day before we left Thailand. On our way out of Bottle Beach, the hill was so steep that we all had to get out of the truck and walk. Nobody was particularly happy about that. We took the Haad Rin Queen ferry to get to Koh Samui. 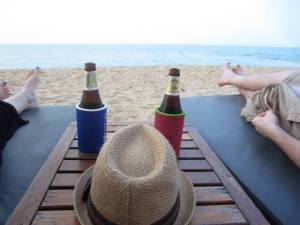 Koh Samui was a nice change from Bottle Beach because the ocean was very still. We stayed on Maenam Beach. The girls enjoyed swimming in the ocean, but Koh Samui was so much busier than Bottle Beach that I think we were all a little nostalgic about our stay on Koh Phangan, though the water was more beautiful.

We decided that our stay on Koh Samui would be a culinary vacation. Our first meal was at Angela’s Diner, where they made their own corned beef. I had a reuben. Thursday night we went to a very nice restaurant called ‘The Farmer’. It overlooked a rice field, and the seating was all outside. The view was beautiful. I ate fried duck, and Angela had a lobster. They also had their own rice, which was delicious. We were supposed to go to a different restaurant, a small ‘ma and pa’ place, but I was in charge of the reservation and somehow we ended up being picked up and dropped off at the Farmer. It was a happy mistake.

On Friday, I rented a scooter. It was an automatic and gasoline powered. I was hoping for a motorcycle, but the scooter was fun. Angela and I scooted around the Maenam Beach area, but the traffic was so dense that it was a little stressful. 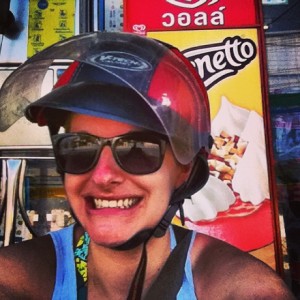 We ended our stay with dinner at a very fancy resort called Sala. On Saturday, we returned to Bangkok the same way that we had arrived. The beaches were a wonderful way to spend a week, and though we did not dive or fish, we certainly were relaxed. All for now.