Angela and I are taking it easy after a pretty eventful weekend. On Friday, I received some bicycle tools that I ordered from an online store. My newest goal is to build my own bicycle. See below. 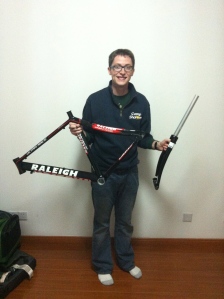 My aunt and two of my uncles tried to convince me to order a larger frame. I could not pass up the Raleigh frame as my ‘home’ bicycle is my father’s old Raleigh. I did figure out that the frame is still larger than the Giant I bought and had stolen at the beginning of the year, and that size was comfortable for me so I am hopeful that this frame will work. I ordered a bottom bracket and a crankset with the help of my Uncle David, so installing those will be my first project. I will post more on that when there is more to post about.

Friday night was fairly laid back. Angela was not feeling so good, and I had booked a gig playing with a local community orchestra. I was contacted through a friend who I met in a jazz band here, and they needed a trombone section. She asked me to play bass trombone for the 1812 Overture, and I happily agreed. I later found out, upon arriving at the concert hall on Saturday morning for the dress rehearsal, that the orchestra already had 8 trombone players. We were needed because the director wanted extra brass in the balcony for the final chorale. Skip to 12:50 of the recording posted earlier to hear this big brass chorale. I was also told before I left the dress rehearsal that I needed to memorize my part for the concert the next day. I was a little disappointed that I was not able to play the entire piece because the orchestra was quite good, but I still enjoyed playing the chorale. Also, they paid me 100 RMB, so that didn’t hurt either!

Saturday night I took it easy since the concert was on Sunday morning. I played a game with some coworker friends called Settlers of Catan and went to bed at a reasonable hour. Sunday I played in the concert. The orchestra also played ‘Night On Bald Mountain’, and a piano concerto.

Tonight I tried to watch a James Bond movie. I recently purchased the complete set for very cheap at a local movie store. These stores are great, because you can pretty much buy a movie immediately after it is released in theaters. However, as you might imagine, sometimes you get unlucky, and several of my James Bond movies won’t play. I will have to return them and see if they will reimburse me. All for now. 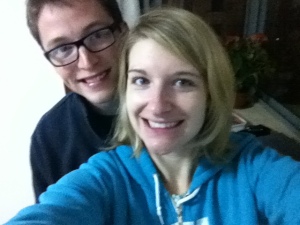 One thought on “Gigs and such.”