Another week in Shanghai has ended!  Everything this week was pretty normal…I think!  Jason started playing in a community jazz band and had a rehearsal for that on Tuesday night!  I stayed in and researched info about our trip to Thailand!  On Wednesday we had Taco night!  It was yummy!  I was able to find all the ingredients (a little expensive) but it was delicious! I even splurged on some Tostitos Hint of Lime Chips!  YUM!  I even made homemade salsa!  It felt great to cook again!  And the tacos were delicious!  On Thursday night, Jason had back to school night for the high school, so I decided to go out for some drinks with my co-worker Sean and his bride to be Tiffany!  We went to the Shanghai Brewery!  They have a decent happy hour, delicious nachos and yummy thin crust pizza!  It was a fun night out!

Yesterday, Friday the 13 played it’s part well!  It was so hot and humid that you knew a storm was brewing!  And of course at 3:31 the rain started!  At first it was a light sprinkle, then steady rain, then DOWNPOUR!  I had to stay after school for musical rehearsal!  Jason raced home in the downpour and got soaked!  By the time I was done with rehearsal, the whole courtyard at school was flooded.  The bike lane had a foot of water in and it was still raining!  I decided to go for it!  I got my bike and walked it through gross China water up to my calves!   Thankfully I had left my rain jacket in my backpack and my only other advantage was the fact that I wore my Teva’s that day which made it super easy to drift through the water! 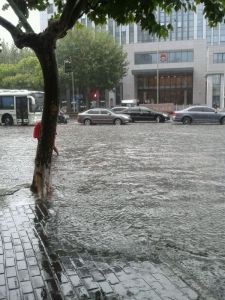 Right now it’s Saturday morning and the sun is shining!   Oh and I just got an email saying our Spring Staff inservice will be in Thailand.  Of course flight and hotel will be covered!  Jealous?