Angela and I spent one week in Hanoi, Vietnam last February and loved it. As we were deciding where to explore during our Christmas holiday, Vietnam came up during each discussion. We finally decided that since we had seen some of the north, this time we would travel from the south to the north. We booked our tickets to Ho Chi Minh city and arrived on December 20th. Angela, being a booking whiz, had arranged for a car to pick us up from the airport and drop us at our accommodations called Long Hostel. Long Hostel was affordable and extremely helpful. The one thing that really stood out to me was how many bananas they give to you – for free! When we arrived, we had bananas. Every morning when we ate breakfast – we got a banana. When we were sitting in the common area waiting to book tours – we feasted like royalty on bananas.

Long Hostel was located in the famous backpacker area of Ho Chi Minh, which is a fun area with a lot of restaurants and bars. It is a great location for a hostel. Angela and I arrived, checked in, and then wandered aimlessly around the backpacker area, which is a big rectangle of multiple blocks. We ate at a very good little local place and called it a night.

The next day we had decided to take the Lonely Planet’s walking tour of Ho Chi Minh. After having just left Shanghai, neither Angela nor I were very excited about hanging out in another big city, but we knew that we wanted to see some of the old Saigon. We usually do a walking tour if Lonely Planet has one, and that is always a nice way to see a city. We saw the largest building in Ho Chi Minh, called the Bitexco Financial Tower, the old Notre Dame Cathedral and several other sights along the way. 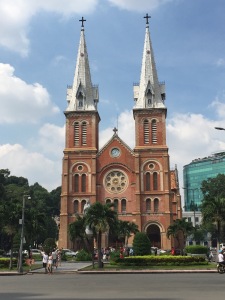 With the hot weather, we decided to venture from the walking tour so that we could catch the War Remnants Museum. This museum was first created as the “Exhibition House for U.S. and Puppet Crimes”, and though the name has changed, the vibe is the same. We left the museum feeling profoundly depressed, but it was well worth the visit. 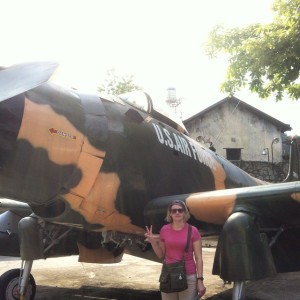 After the museum, we decided to head to one of Ho Chi Minh’s many ‘Sky Bars’, and chose the highest one that we could find. We had a nice view of the Bitexco Financial  Tower, but the drinks were expensive and with the smoggy haze it was hard to enjoy the view.

The next day, we decided to book a tour to get out of the city. We had the option of touring the Mekong Delta, or visiting the historic tunnels used during the war. Neither of us are really into tight spaces, so once we decided that the tunnels might not be the best place to go we settled on exploring the river. We took a tour that I would not recommend. We drove two hours to get to the river, and then boarded a boat, which was nice. However, everything that followed was too touristy. I was hoping for a nature related experience, but was a little disappointed at times. We did have a good cruise of the river while the guide told us a lot of interesting things, and then we arrived on a small island where coconut candy is made. We learned how they make it, and Angela won some free candy by correctly identifying the countries that the Mekong flows through.

After that, we took a bizarre horse-drawn carriage ride down a road, and right back the same way, ending where we started. I was not sure why we did that, and felt sad for the poor horses that are working hard and accomplishing very little. We then stopped at a farm where we sampled honey tea, which was very good. I also got to hold a big snake – Angela opted out.

We had a ride on a traditional row boat through a pretty section of an island, and then ended up at a strange place where we ate lunch and fed crocodiles. 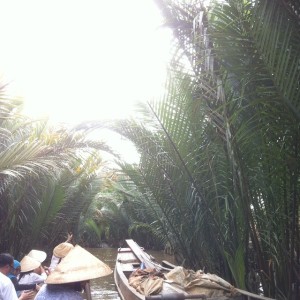 All in all, it was $10 per person and definitely worth no more. I wouldn’t do it again.

The next day, we took a car ride to Mui Ne. Our friends John and Catherine were in town and headed to the same place, so we split a car together. 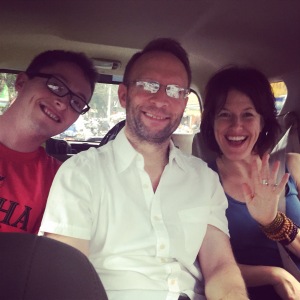 Mui Ne is an interesting place. The beaches are not as long and friendly as other places, as the water is very popular for kite and wind surfing. This is due to the large waves and the extreme wind in Mui Ne. I was not ready to learn a new skill in such a difficult place, so we did not spend much time on the water. Mui Ne has also become a popular destination for Russians, so we noticed that everything was in Russian, and the locals would even speak Russian to us. It was strange.

We did not do very much in Mui Ne, but luckily John and Catherine were in town, so we had some friends to hang out with. One day we spent playing sand volleyball and soccer, and even had a rousing game of mini-golf before ending with a foot massage on the beach. The next day, we woke up very early to watch the sunrise at the famous sand dunes near Mui Ne. I would recommend this highly, as in the morning there were not that many people, and it was not too hot. We did spend a fair amount of time scootering on dirt/sand roads that required me to use some scootering skills that I did not have, but the experience was worth it. Unless I got into wind surfing, I am not sure that I would need to return to Mui Ne. 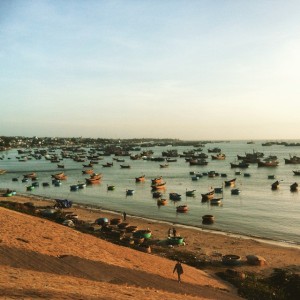 (The fishing boats near Mui Ne)

(Observing the sunrise at the White Sand Dunes) 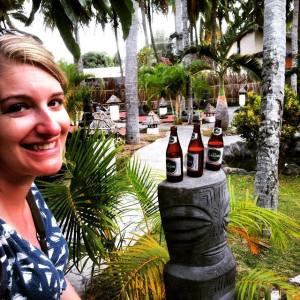