Angela and I decided that for our Spring break, we should see some of China. We have seen embarrassingly little of the country that we are currently residents of, so we settled on a trip to the ancient capital city of Xi’an. I had a gig with my jazz band on Friday night, so we stayed up until around 1:00 AM the night before our 7:50 AM flight. It was a little bit of a bummer, but we made it to Xi’an, and to our very accommodating hostel called the Han Tang House. We had arranged a driver to pick us up from the hostel, but they never showed up. We managed to communicate with a cab driver and found our way. Once we arrived to our hostel, we took a nap! The room was pretty basic, but the bed was very comfortable.

After our nap, Angela and I headed to the Muslim Quarter of Xi’an. There is a large Muslim population, and a large area with many shops and food stalls, along with the Great Mosque of Xi’an. 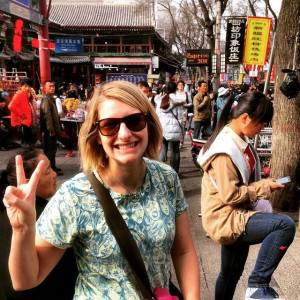